Unless you are a relative of Roland T. Bird you've probably never heard of him, but if you are interested in fossil tracks and dinosaur bones then you most certainly have.  For a man who never finished high school and suffered from poor health most of his life he achieved considerable success in the science of ichnology and as a paleontologist.  His discoveries and work is displayed in several natural history museums in the United States.

Roland Thaxter Bird was born in Rye, New York on December 29th, 1899.  His father was a successful businessman and distinguished amateur entomologist.  His son Roland was forced to drop out of high school at age fourteen because of poor respiratory health, then his mother died of tuberculosis just one year later.  At the advice of the family doctor Roland was sent to live on his uncle's farm where he learned cattle husbandry, a trade that would later on serve him well.

He started traveling about 1920 and found a job working as a cowboy for a wealthy Florida cattleman showing his dairy cows at exhibits around the country.  The 1920 depression brought an end to that so with what little money he possessed he bought a 1929 Harley Davidson motorcycle with a sidecar that he rebuilt as a mini-camper.  He wandered about the country for the next decade supporting himself by working odd jobs. 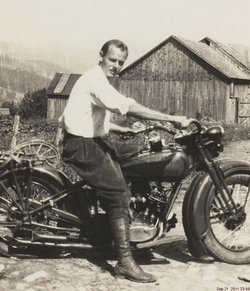 In 1932 he was camping in the desert near what would eventually become the Petrified Forest National Park where he found the skull of a giant fossil amphibian.  He strapped it to his motorcycle and drove it to Flagstaff, Arizona where he bought some lumber and built a box to ship it to his father.  His father in turn sent the fossil to Barnum Brown, a famous paleontologist and the Curator of Vertebrae Paleontology at the American Museum of Natural History (AMNH) in New York City. It turned out to be a new species.  This sequence of events would later lead to Rolands employment as Barnum Brown's right hand man in the field and a preparator of dinosaur tracks and bones at the museum.


While in Flagstaff some locals told him about some giant bird-like dinosaur tracks near Cameron on the Painted Desert.  That night Roland went to a motel and while in the lobby he saw a pamphlet about the Cameron dinosaur tracks with a photo of Barnum Brown standing next to them.  The pamphlet said Brown had uncovered the tracks and they were in Dinosaur Canyon 16 miles east of Cameron.  The next day Roland rode to Cameron and stopped at the Indian trading post to inquire more about the tracks.  All he learned was that Brown had been there two years before but there was no road or trail to the site.

The tracks had only been discovered in 1929 by Goldtooth Semahly, a Navajo shepherd while searching for lost sheep.  Barnum Brown somehow caught wind of it and since he was looking for tracks to include in an exhibit for the museum he hired the shepherd to guide him to the site.  Brown was looking for large sauropod tracks and wasn't interested in the bird-like theropod prints so he left.

Now, three years later with only the photo on the pamphlet and  rudimentary directions, Bird took off cross-country to find the tracks.  For miles he negotiated the motorcycle and side car through washes and around cliffs until the engine overheated and he was blocked by impassable sand dunes.  In the distance he could see some rock features similar to what was in the photo so he grabbed a canteen of water and food and took off on foot.  By chance, good luck and tenacity Bird found the tracks late in the afternoon.  He studied them until dark and returned to his motorcycle with only starlight to see by. 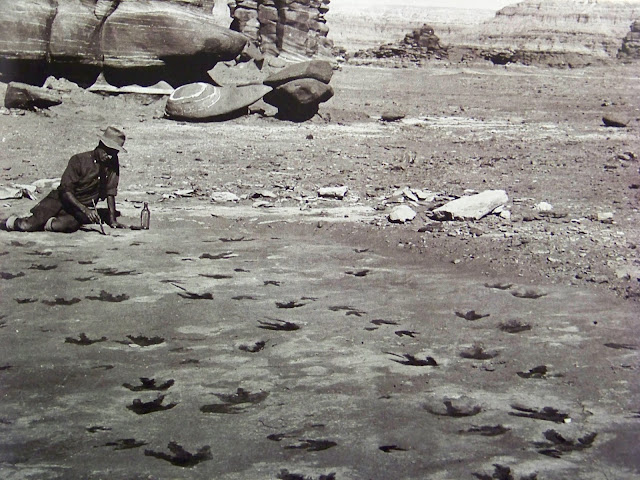 I believe this is a portrait of Roland taken in 1934 at the Cameron track site.
However, in his manuscript he mentions finding the site in 1932 but not
returning to the vicinity until 1937 with Barnum Brown.


For a lack of supplies he headed back to Cameron.  Finding the amphibian fossil skull and the Cameron track site sparked a passion within him that would become his life's work.  Over the next decade Roland scoured the country searching out dinosaur bones and track sites from Arizona, New Mexico, Colorado and Utah to Wyoming and east to Connecticut and New Jersey.

During that time he worked at the Howe Quarry in Wyoming, a massive sauropod boneyard, where he drew one of the most complex paleontological charts ever produced.  It is a work of art in its own right.  Starting in 1934 Roland spent many years as an employee of the AMNH and as Brown's right-hand man in the field.  During WWII he was contracted by the government to find uranium deposits in the Four-Corners region. 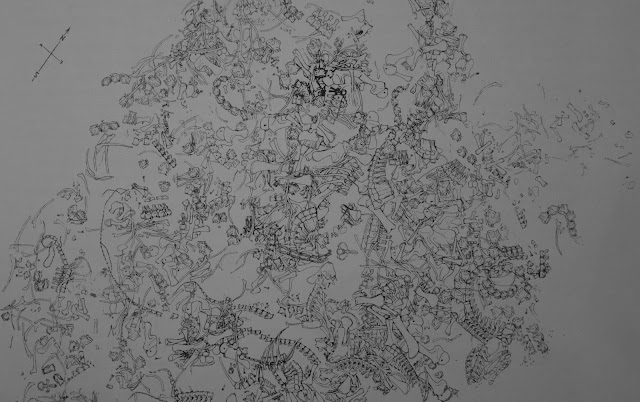 His crowning achievement was the discovery, collection, and interpretation of the gigantic dinosaur trackways along the Paluxy River near Glen Rose and at Bandera, Texas in 1940. A track sequence from Glen Rose is on exhibit at the AMNH and at the Texas Memorial Museum in Austin. His interpretation of these trackways demonstrated that a large meat eating carnosaur had pursued and attacked a sauropod, that sauropods migrated in herds and they could support their own weight out of deep water. These behavioral interpretations were contrary to then-current beliefs and not fully accepted for at least two decades. 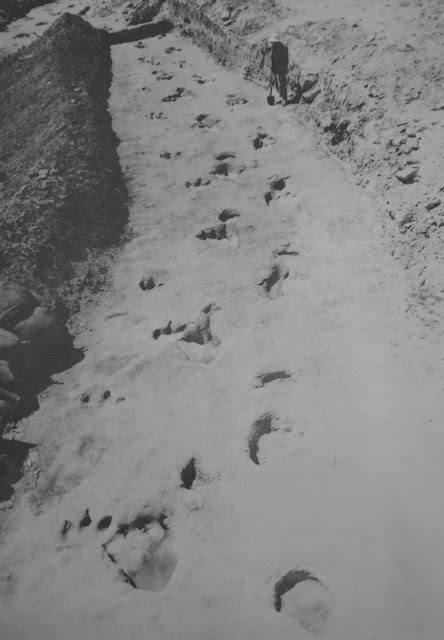 Roland had to retire early for health reasons and wrote the manuscript for his book, "Bones for Barnum Brown: Adventures of a Dinosaur Hunter", edited by V. Theodore Schreiber and posthumously published in 1985.  Roland T. Bird passed away on Jan 24, 1978.


In 2001 I drove through the Petrified Forest National Park and stopped at the visitor's center and museum.  While there I purchased a book about the Painted Desert and in it was an account of Roland T. Bird's search for the Cameron dinosaur track site.  I was so impressed and inspired by his adventure that I decided I would someday search for the tracks myself.  Since I lived in Flagstaff, only 60 miles from Cameron, it seemed a very plausible idea but there were a few obstacle's I would have to overcome first.

To be continued in the following post 'The Cameron Dinosaur Tracks' about my search for the track site.

Click on the photo to jump to my photography blog.